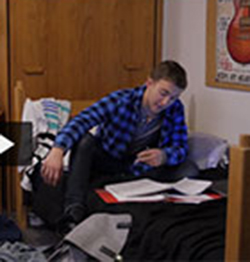 How would you respond if a roommate, friend, or other student exhibited erratic behavior or signs of distress that might be hazing-related?

The role of "bystander intervention" in hazing prevention

Everyone has a role to play in preventing hazing and its associated harms. There are many different ways that you can step in or make a difference if you see someone at risk. Doing so is frequently referred to as “bystander intervention.”

7 Steps to an effective bystander intervention:

The key to keeping your friends and others safe is to learn how to intervene in a way that fits the situation and your comfort level. Having this knowledge on hand can give you the confidence to step in when something isn’t right. Stepping in can make all the difference, but it should never put your own safety at risk.

The film Intervene recognizes all members of a campus community as collaborative partners in the cultivation of campus health and well-being. It also demonstrates the versatility of bystander intervention as a strategy that can be used to address a variety of campus issues.

This film, Intervene, is 19.47 minutes long. The hazing-specific scene begins at 3:17

Intervene was developed by the Skorton Center for Health Initiatives and the Cornell Interactive Theater Ensemble.

Learn more about Intervene and the corresponding workshop.

How to Help a Friend (pdf)